kamakshi
· Snapshot
Like · Likedby · 0
I don't want to sound harsh, but it's quite a tacit fact that nepali men have small package. Not that it hurts a lot to women, but just as most men look for huge assets on women, nepali men fail to comprehend that a woman would almost always look for big (not huge) package. I know there are quite a few techniques available in the market for enlargement. So, I hereby, suggest all nepalese men to go for at least one of them so that they don't have to end up blushing while making out. It's a shame! It's better late than never. Good Luck!
Load Previous

mansion
· Snapshot
Like · Liked by · 0
hareee..new norms in making. tyo biha garnu vanda agadi "chena" dekhaune hunhca ni, testai, you guys might as well start something to match the size of a women/men organs. goodluck.

sweetest_sIN
· Snapshot
Like · Liked by · 0
Oh come on guys we all know that nepali guys have small u know wat :P its not like they had a choice re kya (hehe)

dyamn
· Snapshot
Like · Liked by · 0
Forget about Nepali penis. Nepali girls suck at bed. their sex drive is way too low and they don't giving blow jobs.. so mates made in heaven babiesss...

Gq
· Snapshot
Like · Liked by · 0
hare shivaaa... just like nepali guys dont have big penis.. dats the universal truth.. no need to me shame of that.. nepali gals dont have nice cute butt either... tit for tat...

wot ? wott ??
· Snapshot
Like · Liked by · 0
another one here ... A trucker stops and a truck stop and tells the man at the front that he wants a room for the night, a bottle of Tequila, and the best hooker that he’s got. The man tells him that they have a room, they have Tequila, but all of the hookers are booked up for the night. The man then tells the trucker, however, that he does have a chicken and that this chicken is better than any piece of a$$ that he’s ever got. The trucker says that he’s got to f*ck something so he reluctantly takes the chicken. He goes up to his room, kills the Tequila, and starts f*cking the chicken. The chicken is so good that the trucker f*cks the hell out of it all night. A few weeks later the same trucker stops back by the same truck stop and tells the man that he wants a room for the night, a bottle of Tequila, and the best chicken that he’s got. The man proceeds to tell the trucker that all the rooms are booked, they are out of Tequila, and all the chickens are dead. The man then tells the trucker that they do have a couple of hookers f*ckin a midget and a donkey up in room 18 and there are a group of people in room 19 watching them through peepholes. The trucker says that if that is all he’s got then he’ll take it. The man says alright, but I’ve got to warn you, it’s pretty wild. The trucker goes up to room 19 and starts watching through his peephole and after about 15 minutes he looks to the guy watching through the peephole next to him and says, Man! This is pretty wild! The guy looks up and says, This ain’t sh*t. You should have been here about a month ago. They had a guy f*ckin the hell out of a chicken.

Birbhadra
· Snapshot
Like · Liked by · 0
Okay point duly noted. But i feel sorry for the lady who started this thread. Men can easily see how big of an asset a woman has from outside almost always. How does a woman see how big of a package a man has; unless he shows her by taking his pants off? that means women have to become a whore basically to find the right guy with the right size. sorry ladies didn't wanted to comment here but this is just ridiculous. 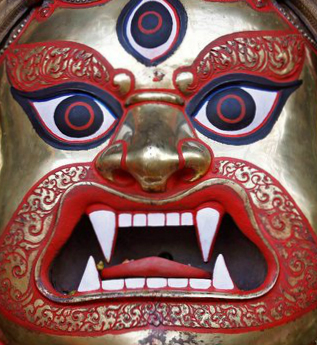 zany_giovanni
· Snapshot
Like · Liked by · 0
Birbhadra and Sidster make valid points. THe originator of this thread sounds really stupid, because she cannot even understand sidster's simple argument. And her only response is "i really belive this to be true". Well, in that case, we really believe you to be a hoe. In order to believe strongly that Nepali men have smaller dicks, you would actually need to sample quite a few Nepali and non-nepali dicks (read: you need to see them butt naked). kamakshi please ignore the next two sentences. To make a statistically significant conclusion, you would need a lot of sample points. As far as I am concerned, there has been no study of this sort. The other interesting thing is that no other women have made any remarks here - it's just kamakshi. Just goes to show that even under this veil of anynomity, most ppl have a decent degree of self-respcet. under normal circumstances, i would just use this girl and discard it along with the ondom. but knowing where she's been i would not even touch her with a ten-inch pole, if you know what I mean. I feel sorry for the guys who she might end up up.

sayami
· Snapshot
Like · Liked by · 0
. 3 cm is long enough to do any kind of good job, any other millimeter is BONUS. .

dharane_kancha
· Snapshot
Like · Liked by · 0
it iz infact mosly discussed issue. If u r a nep guy n u hav small thingy as studies n research showed by kamakshi, it should b same fo galz aswell. they should hav tat compact size to let nep mens thingy in. jasto desh ustai bhes. jaasto thau tyestai gaun. if we've small thingy then u've small openin too. sounds logical dozn't it?

sayami
· Snapshot
Like · Liked by · 0
. When you come to this earth, you had ten centimeter diametered HEAD. .

lwaade
· Snapshot
Like · Liked by · 0
Kamakshi, I can guarantee that you are wrong on this one. However, you got to see to believe it..

symbolic
· Snapshot
Like · Liked by · 0
kamakashi, i would say 8' is big enough for u

Gothnation
· Snapshot
Like · Liked by · 0
lol....dont even wanna say shit on this thread...lol...w/e nice topic tho..but all aint the same