Ashley
· Snapshot
Like · Likedby · 0
Hey! all ladies out there.. Let us hear some of the things youýve done (would do) that makes you think it's a girl thing!(not being corny). Some of mine cliques would be: -Hair do ( esp before night-outs) -Make-up ( it's in every girlýs gene) -Overlook guys trying to come closer **wink** -Pulling guy's leg (damn! they always pick on us) -Shopping mania (shopping like a pro) -Gossips ( Hush! Hush!) - Flashy car :P Ashley! 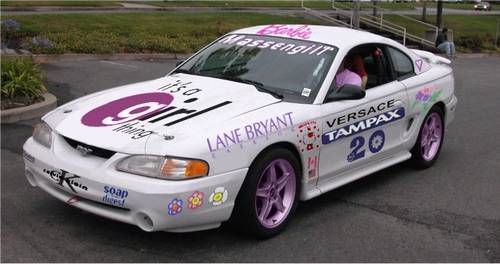 swaati thapa
· Snapshot
Like · Liked by · 0
How about cars? what kinda car u drive? he he he lol well here is mine fav. cool cars

andolan_61
· Snapshot
Like · Liked by · 0
Swwtipie "Average americans make at least 50,000 or more a year....so if they save up that's not that much get it? " I gave up swetie. I can't even believe that you don't the basic truth of american income. what a dumb? This one statement proves that you are uneducated dumb bitch..... Could you do some research about average american income and get back to me...

How Bizarre!!
· Snapshot
Like · Liked by · 0
Sweetie, you are really funny--- If only people could learn from you-- on how to contradict on your own words.... Ms. sweetie if you didn?t notice I had quoted your comments before I gave my opinion on it. Well correct me if i'm wrong but this statement: "The truth is whatever they wear nepali women aren't independent, strong, nor has capabilities to choose their own husband, job, careers etc. U all know this.......why ignore it then?" does not sound like you are blaming the society and not women. Oh well may be i am wrong ...because i am not as educated as you are ... after all i am not a so called "white" or copying one of "white's" Right??? Well, if i remember correctly you are the one who said we should be copying what "white girls --according to you americans" wear to be forward in life ..and when you couldn't validate your own point here in sajha.... then you said lets "put dress subject aside......nobody even bothered to comment on the my main point about learning from american women about their qualities( independence, brain, ability to make her own decisions in life etc)."------- but sadly you couldn't even validate this point either... So now you are saying that you are not blaming nepali women but the society itself.... hahaha let me think now whats gonna be your next point??? hmmm Sweetie :"I am not blaming the society actually i am blaming this world for the situation of Nepal and Nepali women ;o)" One conclusion i came after reading all your gibberish (which was a big torture) was ......you have successfully copied your so called "white" people .....esp. the blondes-- dumb ones. And sweetie just chill, nobody is saying that we are admiring the wrong society...... nobody is saying that we are proud of dowry system...... nobody is saying that we dont like modern clothes (according to you western clothes) but all we are saying is we dont have to hate and look down upon our own nepali clothes...... So Pleaseeeeeeeeee stop twisting and turning things over here ..... And out all the people ...you thought i was doing blah blah ..... Isn't it ironic..don't you think so????hehe Huh... i know there is no point on saying all this things to you because i'm sure it wont go in your head..... Well i dont wanna go on with you and your gibberish because there is no way anyone can have a sensible discussion with you ..and ....especially when you contradict your own word its completely impossible. So please spare me?.

How Bizarre!!
· Snapshot
Like · Liked by · 0
Hey Aisha.. you catch a red line too? lets meet up both wearing red saree in a red line :0) Hi Pisces ... good points there....well lets hope the person you are trying to convey the message gets it too!!! And Fahrenheit 9/11 was a good movie but didn't find it exaggerated though... It was really funny to see Pres. Bush making phenomenal expressions that even monkey's cannot make it ;)

Has anyone from sajha driven that new subaru model ( i don't know the name, more like a truck and a car ) Let me know guys, i want to buy that if it comfortable and affordable..........

Pisces
· Snapshot
Like · Liked by · 0
Preeti I guess you are talkin about SUBARU OUTBACK - form factor is more like hybrid of SUV and CAR - isn't it? But isn't that outdated? Infact, couple of my Frens have SUBARU, its performance rocks. Isn't it SUBARU which won world class rally twice in recent years? I am not sure. Tara I like BMW - Mini Cooper .. Yellow color. Do you guys like it?

thanx pisces, it is not outback. It is subaru's BAJA Turbo , (latest model). I just saw it yesterday. looks great.

confused
· Snapshot
Like · Liked by · 0
THANK YOU G_I, i myself intepereted her post the same way you did, guess SITARA and Pieces think differently or just dont seem to like that..

Pisces
· Snapshot
Like · Liked by · 0
Seriously I got no aminosity against Sweetie. I haven't read any other thread than Sweetie's and some of Sitara's. What seems to me,, Sweetie has so much aggression against Nepali as if she is been haunted by Nepali BHOOT. Lau Confuse broda I may be an ignorant ass not to understand what Sweetie mean. Malai pugyo, Sweetie don't drag me in this thread no more.. Sitara, hold onto her .. :)

Laughing Buddha
· Snapshot
Like · Liked by · 0
Sweetie has an MBA..?! So why is she acting like one right out of middle school? Confused we know why you do. Activist... or Antagonist?

swaati thapa
· Snapshot
Like · Liked by · 0
Dear diz preeti Vw is excellent car untill something goes wrong. Its maintainence is too high even higher than BMW. My Bhauju have VW passat its so cool n fun to drive. Yeah diz i tried BAJA turbo its sleek. Its has great traction like BMW (umm almost), haven't tried sport one though. Well my beloved car is 2003 BMW M3. Its mystic metallic blue in color with black leather interior. its 3.2 liter, 6 cylinder with 333 hp with manual transmission.it was given me by my Granpa.BTW, how about urz do u drive automatic or manual. i love driving manual. U know i am a spoil brat love to race he he he .

Nilasha
· Snapshot 16652
Like · Liked by · 0
I am moving out from NYC in a month. Need to get a car for the new city I am moving to. Any suggestion for a good girly car that looks nice. Budget is $35K.

Nepalimannaparaunemanche
· Snapshot 16908
Like · Liked by · 0
Ashley n Nilasha come with me baby girls, I drive Lamborghini, we can go on a road trip

jerryswari
· Snapshot 17058
Like · Liked by · 0
I thought this thread was Ashley Maddison hack data dump on women members.
Please log in to reply to this post