independent
· Snapshot 0
Like · Likedby · 0
Many politicians have been bribed to support MCC. You all know what happened in Afganistan. MCC is a corporation that is like a parasite which will suck countries dry of their resource and fill the bank of their owners.
Load Previous

independent
· Snapshot 1214
Like · Liked by · 0
Harke it's very simple. Most people go to other countries to enjoy kera. But people like you want to swallow the whole kera including bokra. No class, no taste just greed and cheap mentality.

wegalzrock
· Snapshot 1264
Like · Liked by · 1
@harkhe7 I am quite impressed that you are acting like a grown up and not saying anything as bad to others.

@independent You are provoking somebody just because he has his own opinion about something that doesn't align with yours. I am not gonna call you dumb just because you are anti vax and I believe in vaccination. Also what's wrong with being born in remote village? Being a villager is not a bad thing. Baru unproductive hunu is bad. Why don't you do something productive or come with ideas on how to make Nepal better with or without foreign aid.

independent
· Snapshot 1273
Like · Liked by · 0
Wegalzrock I never said anything is wrong with being born in village. I have huge respect for my friends and people who inspite of being born with less resources in villages have progressed on to become top scientist, industrialists and what not.

What is wrong is when someone acts like kera napaune le kera payo , bokrai sita khayo. You saw how this guy was saying how getting raped is justified if they get enough money. I think any thinking person with some self respect would be against something like that.

As far as you calling me anti vax that's a different conversation and you can join me in the other thread where superior experts like nobel prize winners have expressed their concerns regarding the covid vaccines. https://sajha.com/sajha/html/index.cfm?threadid=134755&noofposts=2

Quite a few of these experts actually invented some vaccines! Now that they are expressing concerns on this particular vaccine, you would have the nerve to call them anti vaccine? LOL. I am the same way. I have had all the other vaccines till date. This is the only vaccine that I am concerned about due to the anomalities and questionable marketing they are doing. Refer back to the thread https://sajha.com/sajha/html/index.cfm?threadid=134755&noofposts=2

harkhe7
· Snapshot 1325
Like · Liked by · 0
@wegalzrock Thank you. You actually rock. Its good to finally have someone sensible here on this thread.

@Independent I never said that a rape is justified in any circumstances. I said that the US prosecuted its own soldiers for war crimes. Few officers from the Afghanistan war were prosecuted for war crimes. The US values the rule of law above anything. The whole existence of the US as a country is based on the constitution and the rule of law. No need to get too personal. You're free to have your opinion as wegalzrock said.

independent
· Snapshot 1360
Like · Liked by · 0
Harke you said it's normal that people get raped trying to make money in arab countries. You sound naive in saying that the US values the rule of law above everything. US is the most capitalistic country in the world where capital makes the statement. Over one million people died in Iraq because the US went to war with a lie saying Iraq had weapons of mass destruction. Where is the rule of law for the death of one million people most of whom were innocent. You are too naive to continue having a discussion with you. Feel free to live in your own bubble which is pathetic by the way.

independent
· Snapshot 1372
Like · Liked by · 0
And you never said rape is justified under any circumstances? Well you can't even lie with a straight face. You are a sick person. You need to thank me for trying to have a decent conversation with you.

harkhe7
· Snapshot 1398
Like · Liked by · 0
I see you didn't understand my point. I was being sarcastic. I was making a point that lakhs of Nepali go to Arab countries for work. If you were worried about Americans raping Nepali women, aren't you worried about Arabs?

independent
· Snapshot 1424
Like · Liked by · 0
I am not not worried about Americans raping or anything like that. I am just not in favor of anyone being above the law.

tallagheremaila
· Snapshot 1450
Like · Liked by · 0
Tesla guyi. I 100% agree with you but still I dont get the clear answer (details of Mcc) from bigknowladge either and read my posting again, I have mentioned it clearly that just thinging nothing ealse. thanks 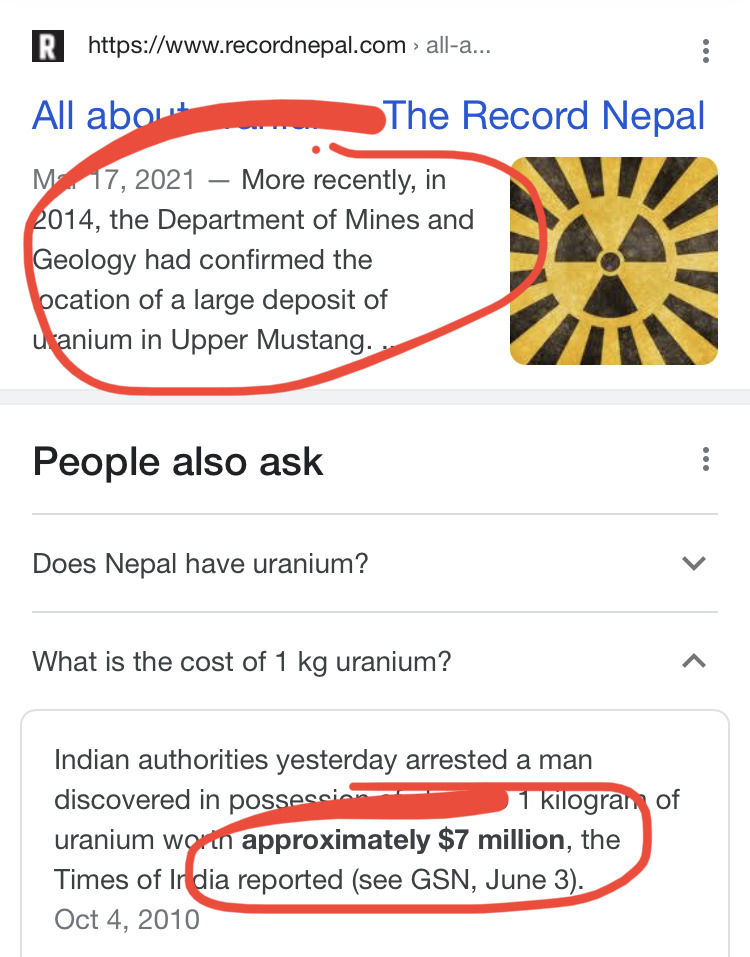 independent
· Snapshot 2088
Like · Liked by · 0
The way these corporations like MCC works is they find natural resources in a country which is not tech savvy to extract or use these priceless resources. They bribe the politicians like few hundred thousand dollars to make out with trillions of dollars in value.

By the time the host country has any of their own technological know-how to be able to use their own resources, it’s all gone.

chicagoan
· Snapshot 2105
Like · Liked by · 0
So I don’t agree with Independent. I think MCC will be good for Nepal. Of course China is trying to undermine it, it is just to increase its influence in Nepal. So we can have our differences and in the heat of the debate things get said and arguments get sour.

But to me, debates aside, the comment by Harke clearly crosses the line

I see he conveniently removed it from his original post and he is trying to say he is being sarcastic. I don’t buy that.

And wegirlsrock, being a girl yourself, how can you support him when his comments should make your skin crawl?

I am a guy and I find that type of comment pretty disgusting, to put it mildly.

independent
· Snapshot 2127
Like · Liked by · 0
Chicagoan you may see short term benefit but in long term Nepal will lose big time. All those radioactive waste etc that will mess with people's health. MCC does not have to worry about safe disposal or anything because they will be long gone halfway around the world.
Wegalzrock you should be more careful of people like harke. Who try to sweet talk you after accidentally showing who they really are. Be a better judge of character otherwise you will get hurt in life. Don't let people fool you so easily

harkhe7
· Snapshot 2204
Like · Liked by · 0
There is a saying in Nepali "जान्नेलाइ सृखन्ड, न जान्नेलाइ खुर्पाको बिड " | For Nepal, Uranium is खुर्पाको बिड | Nepal can make money by selling it. Arab countries got rich by selling oil. What would the Arab countries do with the oil without the American corporation? Nothing, they didn't have any value for it.

@chicagoan I again reiterate that it was a sarcasm to make a point. My intention wasn't to offend anyone especially women. I really hope that people understood my message.

And, I really think wegalzrock is a smart girl and knows how to judge a character. For the matter, I think everyone here in sajha are smart people and know how to look out for their self interest.

independent
· Snapshot 2219
Like · Liked by · 0
I don’t think anyone believes your sarcasm theory especially after you reiterated it several times unsarcastically.

You value money more than anything and we get it. Peace be with you.

harkhe7
· Snapshot 2240
Like · Liked by · 0
People believe me, trust me. You are a fierce argumenter. I give you that. Peace be with you too.

You know who used to say "Greed is good" in the 70s. Donald Trump, and he became president.


And wegirlsrock, being a girl yourself, how can you support him when his comments should make your skin crawl?


@chicagoan first of all did you even read how I responded to the being raped by Arabs statement? If you didn't get a chance to read my response, I've pasted it in here.

"How is it a pride to be raped and molested. I as a woman would be aghast if someone tried to do anything without my consent. I don't have a say on whether you want MCC in Nepal or not. Everybody is entitled to their opinion. But please stop saying that being molested is okay as long as you get paid. There's nothing above your dignity and pride. Also FYI, not all the sex workers in the US have better life. A lot of them are forced into it and beaten by their pimps if they don't make enough money. I hope you know a lot of girls are kidnapped and forced into sex trafficking."

All I said was I was impressed by how he wasn't bad mouthing anybody by saying bad things about their upbringing. He wasn't cursing anybody.

Wegalzrock you should be more careful of people like harke. Who try to sweet talk you after accidentally showing who they really are. Be a better judge of character otherwise you will get hurt in life. Don't let people fool you so easily

@independent i really appreciate you being concerned about me. I know people who act so nice and sabotage others on their back. Trust me I am not that naive. I don't wish bad upon anybody. But I wasn't born yesterday. I now know how people are and how to beat them on their own games. But thank you for reminding me of how people can be.