PLEASE ENTER VALID EMAIL!
log on
· Snapshot 0
Like · Likedby · 0
Meta just laid off 11000 employees , twitter is laying 50% off , apple has freezed hiring , amazon is on freeze since july august . Microsoft hasnt hired since march , same with intel, salesforce . Carvana is in verge of bankruptcy. Coinbase is filing bankruptcy too , binance is in trouble , same with robinhood .

Bennedict
· Snapshot 5
Like · Liked by · 0
Well for Meta, Zuckerberg is giving the fired employees quite hefty severance package and health insurance etc. for 6 months. He well is not concerned about H1B people as he cannot do anything about immigration policies.
I was kind of shocked when Elon Musk fired that recently inducted Indian CEO, as I had seen on social media how elated Indians were when they saw some guy from India went on to become a CEO for Twitter, well it did not last long. Actually nothing lasts for so long. So this layoffs going around will not last for long either.
Some reasons why these layoffs are happening:
# Rising inflation, talk about it. You will know how the prices have gone in your local food store, gas blah blah.
# People controlling their spending habits/ culture, and Elon and Zuckerberg say oh they want to make lean and efficient workforce ever!! Here you can say anything to validate your action.
Last edited: 10-Nov-22 02:19 PM
log on
· Snapshot 27
Like · Liked by · 0
Salary in tech is not very good except netflix but total compensation is pretty decent because they have stock options . Since stock price is going down ( 90%) is some cases i wonder how these people will look after families and pay mortgage. Itz so hard to be jobless when you have kids to feed . This inflation is not going any sooner atleast until sleepy biden is here . Im selling etherium at 20% losss because its going further 40% down . I had such bad luck at crypto investments ..

sajhamitra
· Snapshot 133
Like · Liked by · 1
log on, Salary in tech is very good. Most of the big tech company emplouee earn more than 250k with close to 200k base salary alone for mid level. It can go close to 500k tc. Is that low to you?

Rockb
· Snapshot 328
Like · Liked by · 0
I think these companies hired too many workers and their productivity was not enough to justify over-staffing. I read somewhere that having more employees used to be sense of higher status in the tech sectors. Also automation and outsourcing could have caused this situation. The last but not the least was related to economy and inflation data and loss of advertisers. Inflation will force consumer to spend less and higher Interest rates will make companies difficult to borrow money.

Bennedict
· Snapshot 338
Like · Liked by · 1
Rockb,
You really put your points well. I agree, there is this sense of pride in tech companies to boast that their retention is higher than attrition, but well that idea of having the so many number of employees around the world (the way these companies like to brag) is thrashed very bad by this current economy.
When Elon Musk fired that CEO, Mr. Agrawal, Musk accused Agrawal of giving him the false picture of efficiency to him and what not, so he had to let him go abruptly. I felt bad for this Indian guy as I recall Indians were dancing virtually in social media all over that this guy made it to Twitter. I remember even Shreya Ghoshal, the singer, penned something nice about him how Parag was her classmate in India etc. Now I think all these Indians are mum as it is like a disgrace how he got fired so early.
The thing about slumping economy well, it is attributed by various factors as we all know, the Ukraine war, COVID (how could we forget this?), lockdown etc. etc. I wonder if we will get over this any time sooner?

Fewa_tal
· Snapshot 398
Like · Liked by · 0
Very interesting thread. Agree with you all except @log on when you say "sleepy" then it really puts your argument into that particular category that I do not want to mention here (you know the clown group I am talking about). No one knows the counterfactual scenario as to what could have been done to get over this situation--a year and a half after the global pandemic that took millions of lives and put thousands of small businesses off. Can you imagine how many people had to be let go during the pandemic? What about their consumerism and contribution to the economy? How do you explain that? We have to at least thank to this situation no recession as was predicted by many economists. I don't buy Musk, he is just an engineer who does not know ABC of how the economy works.

Burga-Flippa
· Snapshot 434
Like · Liked by · 0
I feel so relieved that crypto finally crashed around spring of this year and kept crashing.
I've been wanting to buy a new graphics card since early 2020 but I was not willing to pay twice (or more) over MSRP just because these crypto miners sucked up all available graphics cards in market and shot up the price of graphics cards to insane heights.
I was not even looking to buy some top of the line graphics card because I don't have any need for top of the line graphics card. I was happily willing to settle for mid-range graphics card but even those were not available unless I forked up unreasonably insane dollars which I was absolutely not willing to do.
Finally crypto crashed around spring of this year which also crashed the price of graphics cards and I got to buy a decent new graphics card slightly below MSRP. I now hope feds investigate the entire crypto industry and start hauling these crypto scammers/miners/promoters into federal prison.
I would enjoy seeing more of these crypto bros go down and end up working at Burger King outlets. 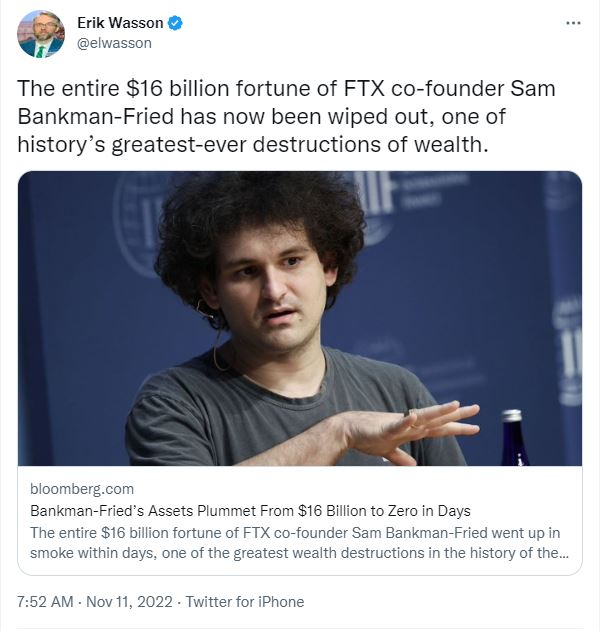 It's been over a year since Nvidia released its RTX 30 series line of graphics cards. But if you have been keeping up with the news, you'll probably know it is pretty difficult to buy one of these GPUs right now. With the demand high and supply short, one individual has taken to committing a crime just to obtain these desirable graphics cards.

Bennedict
· Snapshot 885
Like · Liked by · 0
Amazon laying off 10,000 employees this week itself! Some reasons that are coming up are because in the e-commerce department, they spent so much on making all these warehouses and now with customers wanting to go to stores themselves and spend, Amazon is trying to scale back and even lease out spaces they designed as warehouses. Really?
Twitter cutting 3700 jobs
Meta 11000 jobs as said before
Microsoft less than 1000 so far
Salesforce some 100s
Zillow, Snap, Robinhood already laid off 300 employees
Lyft to lay off 13% of its workforce
Intel layoffs coming in Q4, well!
Unemployment claims at 8 years high.
This is quite getting gloomier by day.

sajhamitra
· Snapshot 932
Like · Liked by · 0
Amazon does lot of layoffs and firing. It’s called PIP. 10,000 layoffs are on top of that PIP.
Please log in to reply to this post