ejuram
· Snapshot
Like · Likedby · 0
Muslim who converted to Christianity released Agencies Kabul: An Afghan who faced the death penalty for converting to Christianity from Islam has been released from prison after the case against him was dropped. Abdul Rahman, 41, was freed from the high-security Policharki prison in Kabul on Monday night, after the United Nations announced he had appealed for asylum outside Afghanistan. Authorities said they were looking for a country willing to take him. Prosecutors appealing for Rahman’s release said he was “mentally unfit to stand trial”. It is believed Rahman may be sent overseas for medical treatment. Spokesman for the UN, Adrian Edwards, confirmed that Rahman asked for asylum outside Afghanistan. He said, “We expect this will be provided by one of the countries interested in a peaceful solution to the case. According to an official linked to the case no country has yet to offer asylum to Rahman. Hours before his release hundreds of people, including clerics and students, marched through northern Afghanistan chanting “Death to Christians”, in protest of the decision to release Rahman. Senior Cleric Faiez Mohammad said, “Abdul Rahman must be killed. Islam demands it. The Christian foreigners occupying Afghanistan are attacking our religion.” Some Muslim clerics threatened to encourage Afghans to kill Rahman if he was released, citing that he is guilty of apostasy and deserves to die. 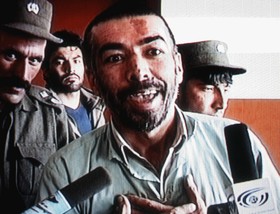 ejuram
· Snapshot
Like · Liked by · 0
Actually I saw this Story over the T.V,Couppla Weeks Back And I was surprised to know That This Kinda thing's Still exists But I was realli touched by this guy,Infrontta the camera This guy was sayin somthin inAfgani.........And someone was translating it in english He was sayin "I blieve in trinity god and I am not afraid of death, Isnt it amazing?that gods' working through guys like Him ? Lets pray for him, I blieve that his testamony is gonna open those closed eye's and the doors of People's Heart. Amen, Eju.
Please log in to reply to this post