nepalean
· Snapshot
Like · Likedby · 0
Today I was listening to one of my collection, there were some really good songs of Prakash Ojha. Unfortunately this great singer is involved in the sexual exploitation of younger women and underage girls. When this came into news, one of his song was in no 1 hit chart. I heard that his songs were boycotted. Are his songs still banned in the radio and televisions? He is supposed to spend 10-15 years in jail. But I dont have much information. So lets talk about the singer prakash ojha. Here is one of the link that explained about his case. - http://www.kantipuronline.com/Nepal/Archive/130th%20issue/index.html 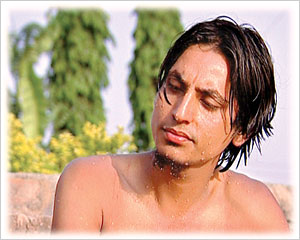 prajatantra
· Snapshot
Like · Liked by · 0
I did not understand one this in video. Is the video showing Prakash Ojha flirting with his "mother" character while his "father" character is sleeping?

Pink
· Snapshot
Like · Liked by · 0
uff I meant to say, Prakash Ojha isn't teasing his mother or tyring to flirt with him, it's his own dad dreaming stuff like that while he was sleeping and remember at the end he finally wakes up and they all go together to eat dinnner??

thebeast
· Snapshot
Like · Liked by · 0
He is a good artist. And i read an article abt him and his interview where he says; " I know what i did was wrong and i deserve the punishment, for i never forced that girl for anything. She knew about everything we were doing and she was equally responsible" Yo sabai Women right dherai bhara bigreko !!!

Pink
· Snapshot
Like · Liked by · 0
ohhh ke re????? thebeast woman rights dherai bhayera re? what do you mean by that.. and to keti ni testai ta raichani, sano bhayera thulo mancheharu sita testo garne and was she notpunished or what?

prajatantra
· Snapshot
Like · Liked by · 0
But guys that does not mean he can get away with that right. After all he was a mature adult, while girl was in teen age. They do not know what they are doing. Thats why the law has concept of Minor or Adult for trial in any case. I agree he was a good singer, but not matter how he argues, it was his mistake, he hit his own leg with an axe. BTW Pink I got it thanx.

Swatantratagaamy
· Snapshot
Like · Liked by · 0
What? r u guys kidding? I heard that crook already got out and has recently released new album 377 or something. The album name 377 was named after his 377 days of jail time. I hope he had learned the lesson.

batas
· Snapshot
Like · Liked by · 0
Why prakas ojha crook man?

bibas100
· Snapshot
Like · Liked by · 0
Pink, Are you sick or what? Terming the little kid as equally responsible? Remember they are all innocnet kids who were swayed by the idea of coming to Ktm and being an actress. Prakash Ojha is a rapist and he should have been sentenced to death(only wish we had such a law in Nepal). He is a child molestor...and you guys still appreciate him? Damn you all. What if the girl who was molested was your sister? This freak was popular and took the advantage to molest the little kids who probably did not even know what sex is...