logan
· Snapshot 0
Like · Likedby · 0
You Nepalese Trumper still believe that Trump is going to win or he is trying to over turn election ? 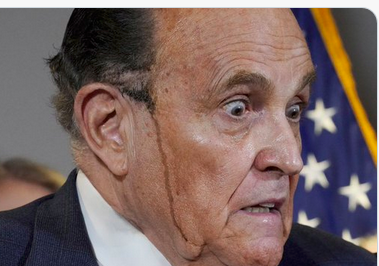 polisci
· Snapshot 6
Like · Liked by · 1
I watched this conference too to try to find out what's going on regarding the Trump side of things. What I got out of this conference was that if there was indeed an election fraud then it needs to be investigated. Election is the foundation of democracy and we cannot take it lightly if there is significant evidence.

A lot of things were said about things not looking right like over hundred thousand votes appearing simultaneously in different states, and to make things interesting it was the same exact number of votes! Also there were multiple instance of hundreds of thousands of votes increasing overnight for one candidate only while the other candidates number remained the same. These information were taking with screenshots of the official vote counts so not conspiracy.

The chances of these things happening in a fair election is zero so there is definitely something going on. On top of that, the voting machines turns out to be owned in part or whole by George Soros who has been a constant supporter of the democrats.

Well there was a lot of valid points said during this one and half hour conference and all the media people showed was Gulliani sweating through his hair coloring. It just shows how media is so biased that they will never do any reporting with integrity.

No matter how much these media and social media have been creating an alternative reality by almost crowning Biden as the elected president, legally he still has not be a certified winner. Without legal certification, the media victory does not mean anything so I am waiting to find out what happens with popcorn.

And again, just because I don't agree fanatically with the media story does not mean I am trump supporter. But yes I do support a fair election!

nepalikahilo2020
· Snapshot 43
Like · Liked by · 1
I don’t think Trump Campaign can flip the election or prove there was any voter fraud or irregularities but Its interesting seeing the media dismiss the Trump campaign for not providing evidence of fraud accusations (despite the fact there are affidavits and witnesses), but if they have hard evidence of actual vote switching, wouldn't any rational person want to wait to introduce it in court so its not tainted or thrown out? The same media who insisted without a shred of proof upon Russia collusion in the 2016 election now insist with the same familiar dogmatism this 2020 election is fundamentally without flaw and they act like our credibility is on the line. The media’s manic insistence that Trump’s team is advancing a “conspiracy theory” is based not on a proven demonstration that what they are saying is false, but on the desperate fear that much of it might be true.
To me it looks like the media knows this and uses it to attack dishonestly instead of just letting the process play out. Nothing wrong with having a little patience and seeing if something unethical did in fact happen. As Polisci said, I’m up for fair elections not just this one but also for the future elections because it is the key that we the people have the power not otherwise.

GwachAquarian
· Snapshot 117
Like · Liked by · 0
It's easy to make outrageous baseless claims and roil the likeminded folks who are just looking for someone to come forward and fan the flame of their unreasonable biases. But where is the fuc'in evidence?
America is a nation where lot of folks still believe that earth is flat, human landing on moon is a hoax and 9/11 was a government covert operation.

nepalikahilo2020
· Snapshot 115
Like · Liked by · 2
@Logan: I’m sure everybody in here can see your ignorance by now. Please stop showing your ignorance and making fool of yourself. You are blinded by hatred towards Trump so much that you are not worthy of having civil discussion. As I have said in my earlier thread, Your type can’t keep Trump off their mouth and actually have ideological discussion.
Where have I even slightly insinuated that Trump’s mocking or anyone mocking others is okay?Again, I’m not here to defend Trump nor attack Biden, I could go on and on if I really wanted to bring up Biden’s failed policy or his personal flaws. But again that’s for rotten minded people like you who are not able to take even little bit of criticism about the ideology they support.

LoganKobau
· Snapshot 125
Like · Liked by · 0
Ridicule him as much as you want but have you stopped and thought to yourself, maybe this was a strategy to get the left leaning population to watch the press conference ? Majority of the democrats would not even give it a second thought to watch the video but now because of this, millions of them are watching. If it helps in bringing awareness to even 1% of them regarding the fraud that took place in the early Morning of November 4th, wouldn't it be a success for Giuliani's team ? Maybe you should stop being so gullible. Not everything is as simple as it seems. Trump has been playing this game for ever.
Last edited: 20-Nov-20 03:38 PM

GwachAquarian
· Snapshot 209
Like · Liked by · 0
Well sounds like there are plenty of Sidney Powells here.
Hey your mom sucked my wee wee..but i will not provide evidence in public..there is plenty of her videos sucking wee wee .

nepalikahilo2020
· Snapshot 227
Like · Liked by · 1
@GwachAquarian: You should know this is an investigation, and getting the information prepared and presentable in a court of law is the priority, not giving a news organization a "scoop". However,I  don’t think Trump Team can prove there were any voter fraud or irregularities. Yes, we all want to see the evidence, if there is any but give it a time and see how this plays out until the court decision. Even for the simple crimes it takes months of investigation to come to conclusion but In this case why is the media and some people are jumping into conclusions when the case is not even presented to court yet? Media is not the Jury here.
Last edited: 20-Nov-20 03:08 PM

GwachAquarian
· Snapshot 261
Like · Liked by · 0
I don't care about this election. But you should know that your mom was damn good in giving head. There are tons of evidence.

nepalikahilo2020
· Snapshot 266
Like · Liked by · 1
@GwachAquarian: Haha Individual like you who can’t control their emotions and resort to name calling crack me up lol. Individual like you Who doesn’t have valid counter argument or feel threatened or challenged about their  narrative, ideology and beliefs. Then they suddenly stoop so low and make themselves look like an a** as Mr GwachAquarian has presented himself here. I don’t even have to try hard to bring him down.
Last edited: 20-Nov-20 03:58 PM

nepalikahilo2020
· Snapshot 310
Like · Liked by · 0
Haha here you go again. Did I hurt your little feeling? The more you talk the more you are show casing your weak mind and filthy upbringing.

GwachAquarian
· Snapshot 315
Like · Liked by · 0
No..your momma is damn good at giving head..like i said there is ton of evidence.

logan
· Snapshot 965
Like · Liked by · 0
Orangeman is still optimistic that the electoral college will swing to his side and sees victory.
Sajha Visitors should have optimism like Orange man then you would not fail ever.

He lets reporter know that he is still the president of USA when asked if he is going to concede?

logan
· Snapshot 1090
Like · Liked by · 0
Here is the video telling the reporter that I am the president and never ever talked to the president like that. Did he asked personal question like How long is your weenie?