ne0
· Snapshot 0
Like · Likedby · 2
(Election is near, here is my obligatory piece in case you were missing my input.)

The last election has shown a very dangerous reality that has been shaping up in the US for the past decades. Decades long political collusion with affluent industrial stakeholders have taken a deep rooted presence in every fabric of life. The upper echelon of elites effortlessly making billions through pay per play deals with easy access to ownership and control of media to effectively create crisis and hide corruption on demand. There is an established deep rooted profitable system already in place involving all sides of politics who are comfortably siphoning up the money from the working class and through political and business influence across the globe.

While career politicians have been driving this greedy profitable model, in comes Trump with his own misgivings but with rhetoric that was enough to make him win the election to become the President of the United States.

Before Trump, the position of the President of the United States held a lot of respect and admiration as this position was the culmination of all the opportunities anyone could hope for, as the saying goes - even an immigrants children could become the President of the US if they are capable of. This position symbolized an awe inspiring belief in the fairness of the rule of law to provide anyone the chance to become the most powerful person in the world.

But this was not a normal election between career politicians. Trump came on to disrupt the comfortable profitable status quo of the established corrupt system. He was not any common politician who was entrenched in the system that was favoring one top class of elites.

The respect and awe that was held by the position of the Pres of US all over the world was systematically crumbled and corroded by the system that wanted to get rid of this person who was disrupting their normal pay to play profitable system in place. They would by any means try to bring him down.

In the process they showed to the people of US and the world that the position of President is not as powerful as previously believed. As the establishment used all of their connections in all offices such as CIA and FBI to turn against the president, this undermined the president's assumed power as the Commander in Chief of the world's strongest army.

In a democratic country, all institutions of security have to be answerable to the elected president, but it became clear that was not the case. With years of Russia gate that proved to be fake and "Not My President" rhetoric perpetuated by the establishment democrats.

This "Not My President" rhetoric is the most dangerous propaganda in the history of the US - as it goes against the tenet of democracy. With access to 90% or more of media, the democrats have perpetuated this blasphemy that would rather destroy democracy than accept the person who won in election fair and square.

Trump comes with many personal problems but he was not groomed to become a president. Trump has had his own personal issues with multiple people. Let's say maybe 50 or even 100. To whom he was not fair, to whom he was not ethical or nice. Compare that with millions of people affected by the democrats pay per play scheme. Millions that have been harmed because the food we eat the drugs we take is not as safe as it should be because the profit came in the way of common people's health. Millions that have died across the world as the democrats have favored never ending wars that ensured humongous profit. They were even ready to wage war with North Korea and Syria but their plans were put in hold by the democratically elected president who they do not want to accept.

Using the full influence of media and institutional power, the democrats are effectively trying to brainwash people that democracy is bad, a democratically elected president is bad, and that their own entitled deep rooted system is better for everyone. They have done everything in their power to demonize and make a boogeyman out of Trump. At the same time doing everything they can to hide their own corruption by outright banning content that reveals their misgivings. Case at hand, social media hiding the current revelations on Hunter Biden's laptop which practically showed that Biden and his family made millions using their political influence, in addition to damning ethical and moral issues being hidden effortlessly using their influence in social media and mainstream media.

Without democracy we have nothing. We have a bunch of entitled people ranting on how heir entitlement has been taken away from them. This is the most dangerous phenomenon this century has seen in America. With media control, the opposition has created a fake narrative and propaganda that has been mastered in labs spending billions of dollars to perfect these narratives as reality with utter disregard for the principle of democracy. It is heartbreaking to see normal people being brainwashed to speak out against the norms of democracy.

I am a non political person with opinions and observations about what I perceive. In these times of excessive information bombardment, it is easy to lose sight of reality but one cannot stop trying to grasp reality on our own instead of letting the media do it for you. At the end of the day, politics is about the better of the worse. What has the worse impact on the lives of people here and in the world? Who has perpetrated more wars? Who has been in politics for how long and what have they achieved? While some may be influenced to see what is worse, some have to really rise over the white noise generated by the institution that create confirmation bias of their own entitlement.

In some ways, this election feels like an option between a hustler and a crime syndicate.

mangale
· Snapshot 161
Like · Liked by · 2
May be need to find a better disruptor than a con man who is narcissist psychopath, and acts like a toddler. Steve Bannon must be ashamed.

ne0
· Snapshot 225
Like · Liked by · 2
nas lets hope people choose the less toxic option.
Mangale, we are not going to get any other disruptor any time soon so at this point it’s either a con man or a crime syndicate. Choose your poison well.

GeetMaiJawaafDiu?
· Snapshot 237
Like · Liked by · 1
At this juncture, most of the systems governing the US are broken including the much-tauted system called 'Democracy'. Human beings, in general, have always been cunning enough to bend any system to their own or their group's benefit. I am sure Socrates would beg to differ regarding the does-no-wrong attribution of Democracy. For instance, if 51 blind people out of 100 people declare that "the color of milk is blue and not white', the rest of the 49 people have to accept that as a truth until the next election cycle.
As the influential presidential candidate, Andrews Yang, expressedly said, "Trump is a [merely] sympton of a disease [inflicting the country]". Thus, to be completely fair, was America perfectly functional before Trump entered the White House in 2016? Remember the gridlocks between Democrats and Republicans in Congress about government shut-downs emanating from debt-ceiling crises, just to name an instance.
All in all, Democracy is broken as it allows career politicans to run the country and the World and incompetent candidates are able to find their way to critical leadership positions. Talking about capitalism, it is broken too as the gap between rich and poor widens at faster rate while homelessness and open-defecation plague first-world cities. The welfare system is also pushed to this tipping scale. At each of its extreme, Communism fails, Democracy fails, Fascism fails, Monarchy fails, and Theocracy fails too. Then the question arises, what might work? That's when a tenet of Buddhist philosophy emerges - the Middle Path. 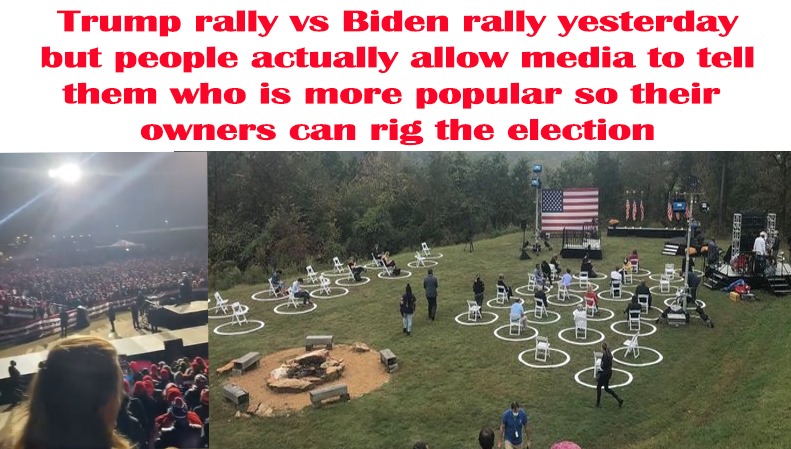 ne0
· Snapshot 508
Like · Liked by · 1
One thing amazing about American politics is how much media manipulation affects public understanding of support. People like Bernie and Trump turn up packed stadiums of supporters 15,000 plus supporters while Biden has not even shown a gym full of supporters turnout. Yet, excessive democrat friendly mass media brainwashing makes people believe that Biden has enough support to win an election - the undemocratic process thereof with obscure mail ballots and hackable polling machines is another topic of conversation on it's own.
Please log in to reply to this post