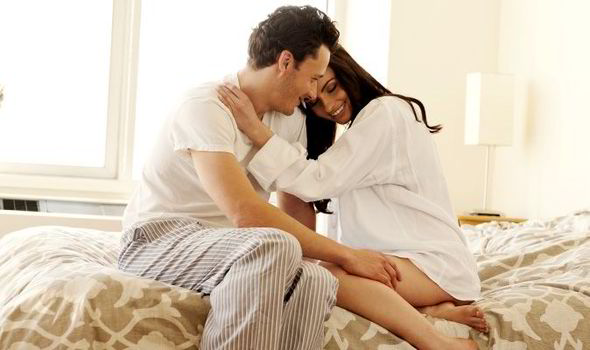 SLEEPING with numerous women protects a man from prostate cancer, a study has found.
By: Jo Willey
Published: Tue, October 28, 2014

Research showed that Lotharios with a lot of notches on their belts are significantly less likely to develop the disease.

Compared with men who have had only one sexual partner during their lifetime, those with a score of more than 20 conquests have a 28 per cent reduced risk of being diagnosed.

But the same is not true for gay encounters, according to the Canadian scientists. In fact, having more than 20 male partners doubled the risk of prostate cancer.

The findings are from the Prostate Cancer & Environment Study in which 3,208 men answered questions about their lifestyle and sex lives.

Lead researcher Professor Marie-Elise Parent, from the University of Montreal, said: "It is possible that having many female sexual partners results in a higher frequency of ejaculations, whose protective effect against prostate cancer has been previously observed in cohort studies."

The study found that men who were virgins were almost twice as likely to be diagnosed with prostate cancer as those who were sexually experienced.

Compared with those who had only had one partner, men who had slept with more than 20 women were 28 per cent less at risk of prostate cancer of all types.

They were also 19 per cent less likely to develop an aggressive type of cancer.

According to one theory, large numbers of ejaculations may reduce the concentration of cancer-causing substances in prostatic fluid, a constituent of semen.

They may also lead to fewer crystal-like structures in the prostate that have been associated with prostate cancer.

The age at which men first had sexual intercourse, and the number of times they had been infected by a sexually transmitted disease, had no bearing on prostate cancer risk.

A total of 12 per cent of the group reported having had at least one sexually transmitted infection (STI) in their lifetime.

While having one male partner did not affect cancer risk, having more than 20 doubled the chances of a diagnosis. It increased the risk of a less aggressive cancer type five-fold.

the topic is about having sex with 20 diff girls not 33 times sex to the same guy...

instagram
· Snapshot 1477
Like · Liked by · 2
Guys divorceguy mean to say "I do alaways 36 so far, i m blessed" kuro bujdainan mora haru.

bittertruth
· Snapshot 2771
Like · Liked by · 0
Having a stamina to sleep with multiple partners for a man alone means he has stellar health and he maintains it. Male body with so many health issues, no matter how many partners he sleeps with is not gonna save him from any disastrous degenerative diseases.

One has to work on it since his teen age. Proper nutrition, daily exercise and enough sleep should ward off not just cancer but so many other diseases.

If you spend your every day like smoking, drinking alcohol and eating junk foods, still expect not to get prostate cancer just by having sex with 20 women? You are dreaming pal.

Whoever wrote this article and came with this stupid research is a d-bag, just the numbering 20 women is as illogical as that "40 virgins or whatever number of virgins u get after you die" ideology.

Before you throw yourself to these stupid findings, save yourself from STDs, start working out, eat healthy and fcking swallow that saw palemetto pills everyday.

Btw, when our ministers believe that there's gonna be six days of darkness and asking panels how to cope with it, can't blame you. :P